Cilium simplify the integration between your Kubernetes environments with your existing network infrastructure.

Integrate your Kubernetes cluster with your existing network

Do I need yet another tool?

In order to connect them together and allow outside access, a mechanism to integrate Kubernetes and the existing network infrastructure running BGP is needed.

Cilium offers native support for BGP, exposing Kubernetes to the outside and all the while simplifying users' deployments.

In addition, Cilium offers a eBPF-powered standalone load balancer that can replace commercial load-balancer while its Egress Gateway feature enables users to implement pre-determined firewall rules for their Kubernetes-hosted applications. 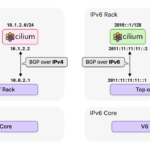 With Cilium 1.12, BGP is now IPv6 capable! You can peer with IPv6 peers and advertise IPv6 Pod CIDRs.

By applying a simple CiliumBGPPeeringPolicy manifest, you can establish a BGP peering session to your Top of Rack (ToR) switches and connect to your existing on-premises infrastructure.

In this video, Senior Technical Marketing Engineer Nico Vibert walks through BGP enhancements in Cilium 1.12, with the integration with GoBGP. This new version also introduces support for BGP over IPv6.

“We're using BGP within our data center. It gives us is a lot of flexibility, scalability and redundancy.

[With Cilium], it's quite simple to connect your Kubernetes network to your BGP environment.

There is plenty more material available if you'd like to learn more.

Step through our interactive labs in a sandbox environment.

Engage with the Isovalent sales team to assess an enterprise-grade deployment of Cilium.